A trip to the Cinema is IMHO a chance to escape the reality of life. Whether it's watching Luke Skywalker and his chums battle the evil Empire or watching Tom Hanks recreate the horror of the Normandy landings  the cinema offers us escapism from life.

I don't go that much, the arrival of Flatscreen TV's and surround sound means many films are quite dramatic without the need to visit the silver screen. However, it can be a fun night out which is where I think the problem lies.

It's fun. Because in Browns NuLabour Britain we cant have that can we? 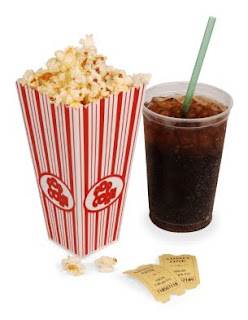 In it's 'Let's interfere because the State knows best' way, The Food Standards Agency have decreed Cinema food is a concern.
That's right folks, as our Nation slides into record debt,  sends it's Troops off to die in uneccesary wars and our Leader trashes Democracy, FSA chief executive Tim Smiths priorities are the size of our popcorn portions.

Time 'nice but dim' waffles on about how we should have the choice of smaller portions. I think Tim should bugger off and stop interfering with people's lives. But he won't will he. He's a paid up member of Browns goons. They exist solely to tell others what to do.

As Gordon is promising a 'Future Fair For All' I think it's only fair that I get to tell his goon Tim what I think he should do.

I think you should fuck off Tim, because if I want your opinion on what I eat I'll make sure to ask you for it OK?
Posted by Cold Steel Rain at 13:48