I think the second picture is a bit arty farty and... well shite if I'm honest. But the first one? 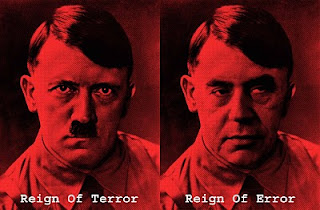 I'd say it's fairly spot on. It's certainly got the lefty twats dribbling and ranting on Iains comments.

Of course I myself think Brown is fuck all like that tosser Hitler. Old Adolf gave the World Blitz-Krieg. Invading and kicking the shit out of Europe in a matter of weeks.

Muppet Brown would have invaded a sausage factory, sold all of his tanks and pawned off his bullets. Because he is a complete twat who couldn't be trusted with a slinky spring. Let alone a Nation.
Posted by Cold Steel Rain at 02:26