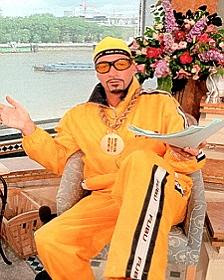 What they shouldn't do is dribble on about supporting a murdering bastard and his unecessary war.

Richard 'Legend In His Own Bisuit Tin' Madeley has come out in support of Blair over Iraq. You have to watch this video to truly believe some of the shit he spouts. I particularly like the way he mentions the Eveeeeeel Maggie and her 'spin city' approach to the Falklands.

What an O2 thief you are Richard. Comparing the Falklands war to Iraq? I don't recall Iraq invading anything British back in 2003. But what the fuck? Let's blame the Tories shall we? Get back to what you do best Dick. Shoplifting Incredibly shit television shows and fixing your fat birds busted bra strap.

Saddams weapons of mass destruction consisted of a smelly sock, a Britney Spears Album and possibly a hand grenade I lost in 1991.

Before you post on here asking hilariously in your Ali G tracksuit 'Is it coz I is black' that I disagree with you.

The answers no Richard. It's because you're a Cunt.
Posted by Cold Steel Rain at 04:28