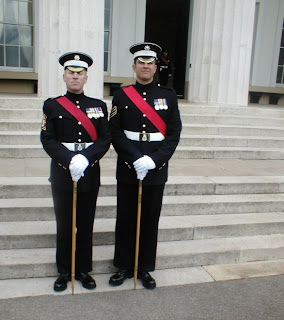 Today, May 7th 2010 in the UK we're celebrating the sixty-fifth anniversary of VE Day, the defeat by Allied forces of the influence of the Third Reich across Europe. As many of you know, I'm a data-fiend (love data) and from British and Commonwealth forces fighting in World War II (1939-1945) the following figures are relevant.
- 580,351 Killed / Missing
- 475,000 Wounded
- 318,000 Prisoners of War
Since yesterday morning we've seen the three main parties in the United Kingdom fail in their duty to attempt to form a government to manage the way in which Britain is run, to make the decisions that are necessary to provide for our service personnel in Afghanistan.
The people KIA / MIA, wounded or PoW total nearly 1.4 million.
To put that in context, imagine the new Wembley Stadium, filled.
Sixteen times over.
And yet, and yet - the squatting Labour government (and in particular the Cyclopsian one) have not resigned. They might claim to be using parliamentary privilege to do so but in reality, for every hour they spend in power without democratic mandate, they are metaphorically spitting in the eye of every man, woman and animal in UK armed forces and the whole UK electorate.
As the chap on the left in the picture above might say, at the very top of his voice:
Jail 'em!
Posted by Dr. John at 09:15